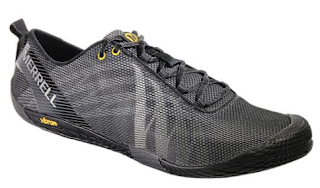 So, I have been running in Vibram Seeya’s for a while now.  By “a while”, I mean, “off and on.”  I ran exclusively in them when I first got into running in 2012, but have used them far less since getting back into running after each of my last two surgeries.  I had a couple of reasons for that, mainly that I found I was getting more blistering on my soles and sides of my feet than with other minimalist shoes I run in (see this blog post: Review: Adidas Adipure Gazelle Running Shoe).

I wanted something truly minimalist (no padding), but no toe pockets and no strapping that might lead to some of the blisters the SeeYa’s gave me.  I saw Merrell announce the Vapor Glove, and I was like, “that’s exactly what I’m looking for.”

What it is & how it works
The most minimalist member of Merrell’s M-Connect line ever, The Vapor Glove is a truly minimalist

shoe in its lack of padding, lack of real structure to the upper, super light weight, and extra flexibility.  You can roll the shoe up.  You can also wash it, it breathes like crazy, and it’s unbelievably light.  It has laces, but, like most of the M-Connect shoes I’ve tried, I found they’re helpful but the fit still isn’t glove-like around where my foot and ankle meet.  In other M-Connects (like the Sonic Glove), this has been a problem, but not here.

The shoe comes in a variety of colors (orange, red, green/blue, dark gray), and has a good, wide toe box – a must for minimalist runners.  I’ve really come to feel my toes constrained in most shoes, and fell in love with the space the Vapor Gloves gave my toes.

The sole is made of a very thin and extremely flexible piece of Vibram rubber.  Like I said, it can roll up really easily, and I don’t mean how you can ‘roll’ a pair of Nike Frees.  I mean, you can roll the shoe up over itself.  They’re awesome to travel with since you can sneak them in any corner of your bag or clip them to the outside of your bag without noticing they’re there or swinging around.

I really like this shoe, and love running in it.  According to my Nike+ account, I’ve put 17 miles on them, almost all of which has been in Boston around the Harbor on the great Harborside path there.  They provide excellent road feel (probably within 5% of what my SeeYa’s give me), have the right balance of grip without being problematically sticky, and really can sort of disappear on your feet.  They can be worn with or without socks, and I’ve tried them both ways.  I think I need a little time to adjust to them without socks, but it’s clearly better.  Therein lies my issue…

My depressions
For whatever reason, no matter what sock I run in with these, I find my feet feeling raw and like I’ve been running on sandpaper starting around mile 1.5.  That’s way too early to have issues like that.  I’ve tried CEP and Zoots compression socks, Swiftwick anti-blister socks, Nike Dri-Fit anti-blister socks, Adidas climacool socks, running socks from The Clymb (awesome site, by the way – check it out) and all end up in the same boat.  I did 1 mile barefoot on a treadmill, and found they were better than with socks, but still not perfect.  My last 3.5 miler had me stopping at the 2.5 mile mark to take off my socks because I couldn’t go on.  The finish was better, but the damage was done.  It took me 3 days to not have so much burning in the skin of my soles to be able to run.  And there were no explicit blisters, so there was nothing to pop or treat and get over. Additionally, and I can’t fault the Vapor Gloves for this, but I’ve had some serious pain in my right foot during and after running with them.  I’m still getting through rebuilding my left leg after my knee surgery, so I know my gait isn’t ideal, and I’m sure that’s why my right foot is giving me trouble.  I’ve had extreme pain at the base of my Achilles’ (painful to the touch), and the outstep of my foot felt like something was broken in it, with sharp snapping pain and extreme stiffness.

I’m working through both (amazing Physical Therapist at JointVentures), and, like I said, I don’t really blame the shoe.  However, using such a minimalist shoe wasn’t a good idea for me yet, so in a sense it is the shoe’s fault, though not a design issue.  More my issue for choosing it just yet. 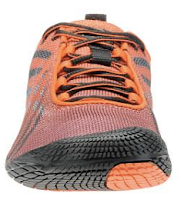 This is so strange for me since I started running with the SeeYa’s and had no issues.  I’ve only had issues when getting back into running.  I’m sure once I’m really at 100% of my minimalist game, and my feet are strong enough, these will be awesome…if I can figure out what to do about the sandpaper feeling.

To buy or not to buy
This is a tough one.  If you want a real minimalist shoe, don’t want to look like you’re wearing gloves on your feet and don’t want to go full throttle and rock huaraches, then I can’t recommend this shoe enough.  If you’re not sure about having no padding at all, or wonder if your feet, calves, ankles, etc are ready for a true minimalist run, then hold off.

My intention was to use these for my upcoming 5K (and 3.5 mile JPMorgan Corporate Challenge race 3 weeks later).  I would still love to given how light and responsive they are, but I’m just not sure I trust them for me at the moment.  Maybe in a few months, but not in less than a month.  I’m just hoping my foot recovers from what’s already happened in these shoes in time for my race!

The shoes are $80, which is pretty competitive for their space.  Unlike some companies, Merrell charges less as the level of build-up of the shoe decreases (e.g. the next shoe up in the M-Connect line in terms of how built-up it is would be the Barefoot Run Bare Access 2, which costs $10 more).  You can get the Vapor Glove at Amazon for more or less, depending on color.  Personally, I am also testing the Bare Access 2, and prefer them – at least right now.  That said, there’s little benefit apparent to me yet of the Bare Access 2 over the Adidas Adipure Gazelle, which has been my favorite shoe so far.  I say, “yet,” because I have only put 3.4 miles on the Bare Access, and I have about 50 on my Gazelles.

I’m a firm believer in minimalist running.  It’s the only way I’ve been able to really love every stride, and see running as something love and long to do. Running minimalist has been the best way that I’ve found to enlighten.your.body.

bryan falchuk is the founder of newbodi.es, a certified personal trainer, behavior change specialist and the best-selling author of "Do a Day". bryan coaches people on their whole health - the physical, mental and emotional combination of wellness that we need to thrive and change our lives.
@bryanfalchuk
Previous Review: Rüez Boxer Briefs
Next Review: Merrell Run Barefoot Bare Access 2

Do a Day Episode 126. The Art of Human Care with D

Do a Day Episode 126. The Art of Human Care with D

Despite being told she would never have children d

Do a Day Episode 125. Creating a Fertile Life with

Powered by WordPress | Designed by Tielabs
© Copyright 2020, All Rights Reserved